So I'm very very busy preparing for the next couple weeks. I'm working on exclusive prints, new print sets, posters, etc. as well as working on the next issue of The Great Sandwich Detective. I thought I'd toss a couple pictures up and let you know about the progress I'm making. 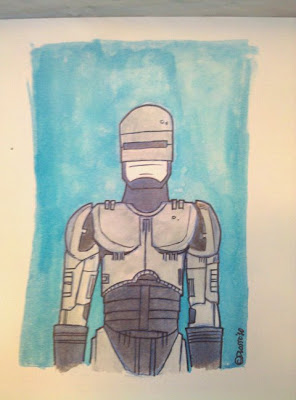 This is a quick snapshot of the exclusive print I made for Motor City Comic-Con 2010. This is watercolor and ink and approximately 5 1/2 x 8 1/2. It will be printed on 65 lb. beige cardstock, the same type I used for the Ghosts! prints. I will only be printing 20 of these (they will be individually numbered) and they will be $5. If you are going to Motor City Comic-Con and would like to pre-order one, just shoot me an e-mail. I will only pre-order up to 5 and the other 15 will be first come, first serve. 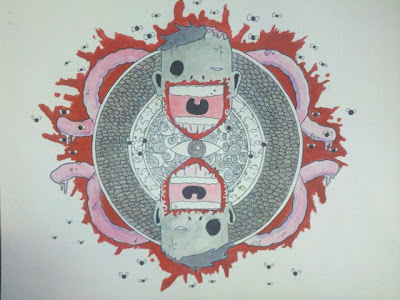 This is the finished version of the zombie painting I posted up a while back. I did this for my friend Matt Murphy's Hall of Zombies in his new apartment. I'm gonna have him snap a picture of it once it's framed and hanging up!

Right now I'm sketching out the three designs for the new print triptych. As I mentioned before, they're going to be monster-themed. I know so far I'm going to be doing one of a yeti that I've been doodling a lot lately and also finally the Eat Da Fingers monster will get a proper printing! I'm still brainstorming a third design. I'm not 100% sure if they'll be available next weekend at MCCC. If not, they'll definitely be available at Summit City Comic-Con and also for order online. Again, they'll be printed on cardstock and individually numbered. I'll probably do about 20 of each.

Speaking of Summit City Comic-Con, I will also have an exclusive print for that show. The print will be How Stuff Happens related. It's going to be black, white and blue and printed on white cardstock and individually numbered. Again, probably 20-30 of them. Also, SCCC supplied me with 10 exclusive sketch cards which I'm working on now. I'm trying to figure out pricing and whatnot for them. I'll also be donating a painting for their Hero Initiative auction.

As for How Stuff Happens. I will be doing a big reprint of Issue #1 this week and next week so I'll have them for both conventions. I'll probably bring about 100 copies to each show. I'll be selling them for $1 (sorry, the free ones were for the FCBD warriors!).

And as always, I'll be doing as many sketches as I possibly can. And giving out high fives and hugs and mustaches.

I'll try to update a couple more times before I leave for MCCC. And I'll be reporting back that whole weekend as well. Yay!