The Great Sandwich Detective #2 Out Today (In Chicago)! 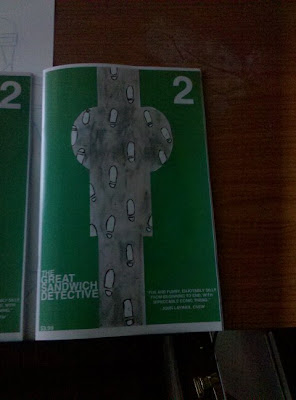 Today marked the Chicago release of the new issue of The Great Sandwich Detective, which concludes the "No Crying Over Spilled Milk" storyline that began in Issue #1. Copies are currently available at Brainstorm Comics, The Comic Vault, Chicago Comics and Challengers Comics. The suburban and out of state stores will be receiving them within the next two weeks (follow the Twitter feed to see what stores get them in stock). I'm very proud of the way this issue turned out. I'd like to thank my good friends Aaron Pittman and Leslie Gauthier for providing me amazing pinup sketches and of course a huge shout-out to Diego Abundis, whose story "The Great Potato Spy" appears in the back of this issue. And thanks to John Layman for his kind words about the series. I think it goes without saying that you should be reading his book Chew every month.

So the next issue will be coming out in August right around the time for Chicago Comic-Con. I'm still deciding whether I'm going to release it in the stores the Wednesday before or the Wednesday after the con. What will probably happen is I'll have copies for sale at Chicago Comic-Con and then the stores will have copies for sale the following Wednesday. I'll have those details ironed out shortly.

My next event will be an in-store event for the release of X-Men #1. Brainstorm is having an awesome party to celebrate. We're gonna have a bunch of awesome guests on hand to draw all over your blank cover variants and Brainstorm will also be having raffles and giveaways all day. You should check it out. I'll also have a new set of 4 watercolor X-Men prints for sale. Here's a preview of one of them: 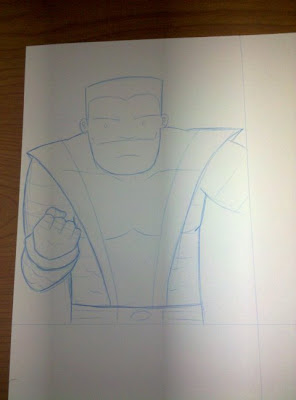 I guess that's it for now. Thank you all for supporting me so much and special thanks to those that go out and pick up a copy of Issue #2! 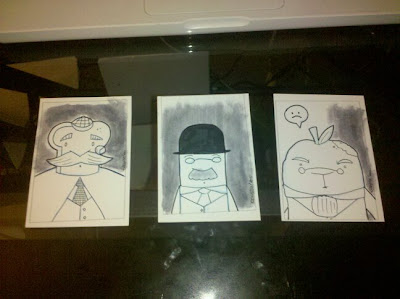 These will be hidden in random copies of Issue #2. Standard artist sketch card size (w/ Kablam publishing logo on back). Inked by pen, backgrounds are wiped on neutral gray ink. One of a kind.

Stay updated on the Twitter feed in case Issue #2 does reach me tomorrow. I'm crossing my fingers. 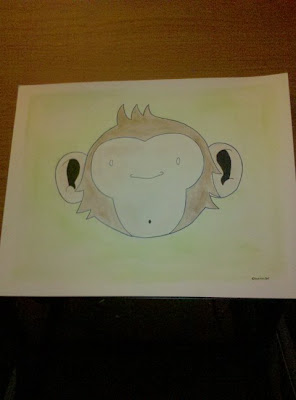 According to Kablam, copies of Issue #2 shipped out today. So there's a distinct possibility they won't arrive on time Wednesday with a possibility of them coming Thursday or Friday. I'll keep you all updated.
Posted by Dave at 12:52 AM No comments: 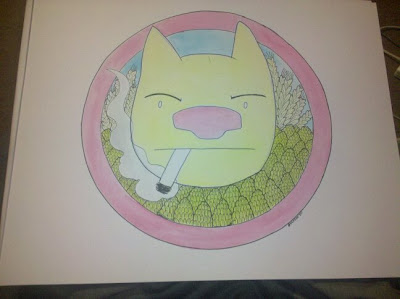 Gumballhead cat painting I did for my friend Eric for his birthday. Watercolor and ink on 11x14 Bristol.

Issue #2 is currently being printed over at Ka-Blam and should be shipping out on June 25th and should arrive in time for the intended June 30th release date. On the last shipment of Issue #1, Ka-Blam provided me with three blank sketch cards to draw on. I'm going to randomly place them in copies of Issue #2. Happy hunting.

I have some cool in-store events lined up for July and August, leading up to Chicago Comic-Con 2010. July 8th I will be appearing alongside Nino Mesarina, Alejandro Rosado and some other great artists TBA for Brainstorm Comics' X-Men #1 release event. We'll be hanging out that day sketching on your blank sketch cover variants of X-Men #1 and doing other awesome stuff. I'll have a new set of X-Men prints for that day as well. More info will be announced shortly. August 14th I'll be appearing again with Nino along with his son Lil' Nino and comics legend Frank Fosco at Monster Island Toys in Chicago. And finally, another event will take place at Brainstorm on August 19th, the day of Preview Night of Chicago Comic-Con 2010. I'm getting together a great group of artists to hang out, draw, sign etc. and we'll be welcoming the Comic Book Syndicate from Windsor-Ontario, Canada as they come down to film an episode of their show in the store. More details on all these great events will be announced.

I should have Issue #2 of How Stuff Happens out alongside Issue #2 of The Great Sandwich Detective on June 30th. Be sure to pick up both. And thank you for the continued support!

UPDATE: I may not have to push the release date of Issue #2 back. It should be shipping by June 25th which should give it enough time to get here. If anything, it might be a day or two late.

I had a fun time this past weekend at C3 2010. I saw some familiar faces and met some new great people and had an all around good time. The lack of copies of Issue #1 was a bit of a pain but oh well, things happen. Thanks to those that came by and bought prints, copies of How Stuff Happens #1 and sketch cards. Here are some random doodles and pictures from the weekend: 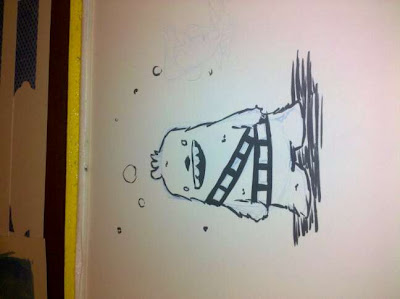 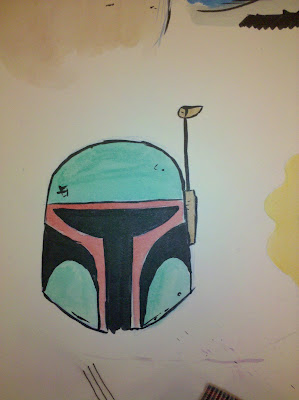 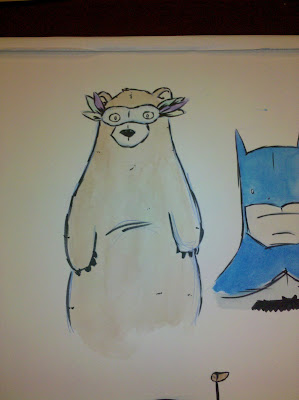 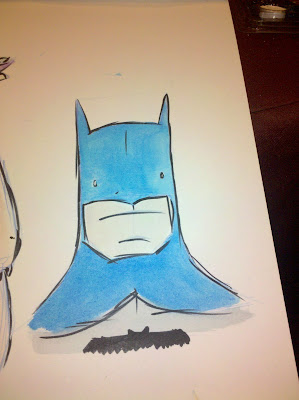 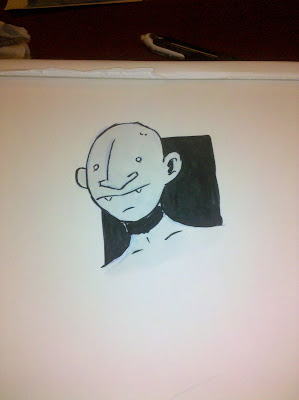 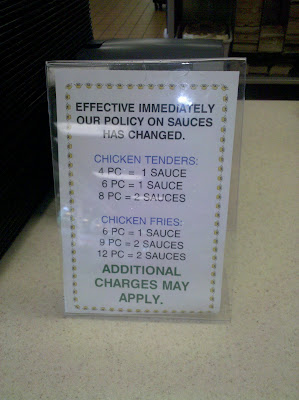 They take their sauces seriously in Michigan 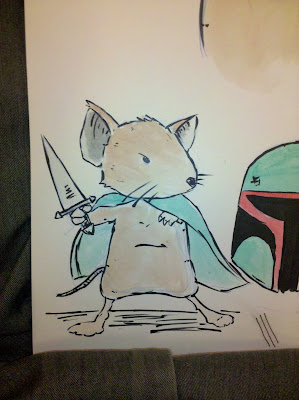 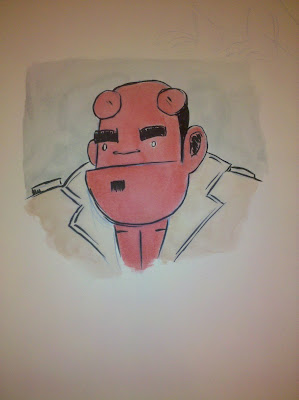 The next con I will be appearing at will be Chicago Comic-Con in August. So I have some time to work on the next issue of Great Sandwich Detective. I'll be appearing at Monster Island Toys on August 14th with my good friends Frank Fosco, Nino Mesarina and Lil' Nino Mesarina. I'll provide more info when I get it.

Do to some delays, I'm gonna have to push the release of Great Sandwich Detective #1 back a week to July 7th. The printers won't have time to print and ship in time for the intended June 30th release date. Sorry about the delay but I'll for sure have it out July 7th and then Issue #3 out on August 18th. I will instead have How Stuff Happens #2 out on June 30th. I'm really proud of the way Issue #2 turned out. Included in the issue will also be a hilarious backup story from first-grader Diego Abundis and awesome pinups by my friends Aaron Pittman and Leslie Gauthier.

I should have every store stocked with copies of Issue #1 by next week. If you know a store that would be willing to carry it, please do contact me!

I guess that's it for now. Stay tuned for more convention, in-store signing and book announcements.

Unfortunately due to a shipping miscommunication, I will not have copies of The Great Sandwich Detective #1 with me for sale this weekend. This sucks a great deal. What I will do, however, is bring along my laptop which will have a slideshow of all the pages and you can read through the issue for FREE! I know it's not as cool as holding a copy in your hand but I'd like for everyone to at least get to enjoy the story. And if you donate $1, I will show you the first five pages of Issue #2 which comes out June 30th.

I will have copies of How Stuff Happens #1 as well as prints and other good stuff and I'll be doing sketches and commissions all weekend. I will be in the Artists section next to the always wonderful Leslie Gauthier. So come on by for some high fives and awesomeness. 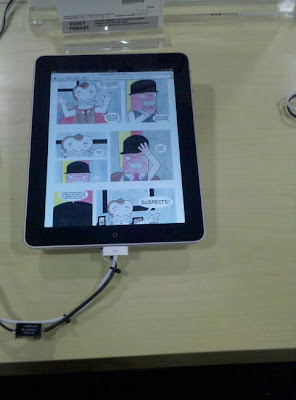 Issue #2 comes out June 30th, so I figured I would share a couple pages with you. If you haven't read Issue #1, a couple of the jokes kinda spoil the end of Issue #1, so beware. 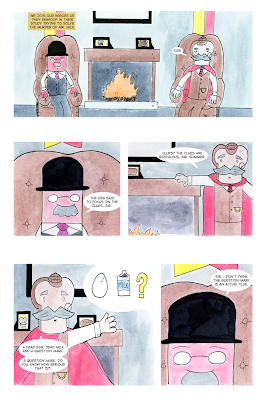 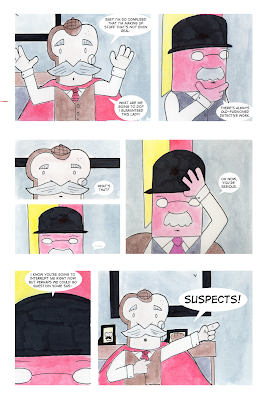 Fun! So yes, the conclusion of the epic two-parter "No Crying Over Spilled Milk" goes down in Issue #2 out June 30th. The issue will also feature a special backup story by first grader Diego Abundis and a pinup by my good friend Aaron Pittman.

As for Issue #1, it is in stock at Brainstorm Comics, Chicago Comics and The Comic Vault in Chicago, IL and Get Your Game On in Ann Arbor, MI. I have ordered more copies to take with me to Cherry Capital Con in Traverse City, MI next weekend and whatever I have left paired with a second order I'll be putting through next Friday will go to the remaining stores waiting for copies. By June 30th, all stores carrying the GSD will have copies of both Issues #1 & #2.

For those planning on attending Cherry Capital Con next weekend, I will be in the Artists Alley at Booth #E10. I will have copies of The Great Sandwich Detective #1, old prints and How Stuff Happens #1. I will also have the brand new How Stuff Happens #2 (out in Chicago stores on June 9th) for sale as well as a Cherry Capital Con exclusive watercolor print. I'll also being doing sketches and commissions all weekend and will again have free mustache stickers for you to wear and be awesome.