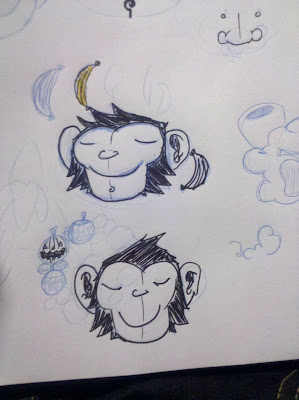 I had a lot of fun signing at The Comic Vault yesterday as part of Wintercon 2010. The staff there rocks. They have a true sense of community there and I felt very welcome right off the bat (the free beers didn't hurt either). Thank you to all that stopped in all weekend and supported all the Chicago artists and thank you to everyone to bought a print or a sticker from me. I have 17 prints left and I'm selling them for $5 a piece. If you're interested in one, please e-mail me. I'm going to have a new set of three prints for the conventions this summer. I'll also have a convention exclusive sketchbook to unveil as well. 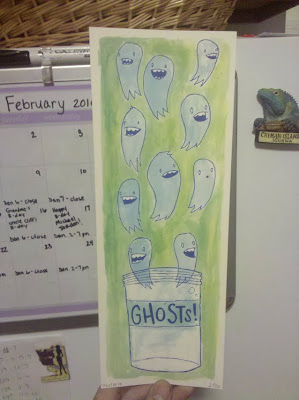 So my next scheduled appearance is Motor City Con in May. I will be traveling up there with my good friend and fellow friend of super models, Aaron Pittman. At this point, I have officially been rejected from C2E2, so unless something changes, I'll just be there as a spectator this year.

I'm going to be speaking to a couple classes about comic book art at Hibbard Elementary School in March. I'll let you all know how that goes. I'm really looking forward to telling kids how fun it is to act like a goofball and draw food.

That's it for now!

Update: I have 11 copies of the Ghosts! print left as of 2/23/10. I'm going to be setting up an online shop soon where I'll be selling prints and copies of The Great Sandwich Detective!
Posted by Dave at 7:28 PM No comments:

This Sunday, February 21st, I will be appearing at Wintercon 2010 at The Comic Vault in Chicago, IL. The event takes place all day Saturday and Sunday and features a rotating lineup of some very awesome Chicago artists/creators including Nino Mesarina, Tim Seeley and Tony Maldonado. There will be special promotions throughout the show. I will be appearing, as I said above, on Sunday the 21st from 4-6 PM.

I will be signing anything you'd like, from copies of GSD #0 and #1 (if you were lucky to get any of the early release, handmade Indy Comic Book Week copies from Brainstorm Comics in January), pictures, stuff, your buttcheek, etc. I will be of course doing as many sketches as I possibly can in two hours. I will also have a brand new limited edition print for sale. The print will come in three different color variations (blue/green, red/orange and black/gray/white) on 4 x 11, 67 lb. beige cardstock with a neat border. I'll also have a bunch of one-of-a-kind pen & crayon stickers for sale. And when I mean one-of-a-kind, I really mean it. Each one is hand-drawn and colored and will be the only one in existence. So come rummage through those. I'll also be selling whatever random sketch cards and portfolio stuff I have in my briefcase. I still have the old Spidey, Ghost Rider and Rorschach prints and I'm trying to get rid of those as I plan on having a new set for this summer's convention season. I, unfortunately, will not have copies of The Great Sandwich Detective #1 with me. All the copies I made for Indy Comic Book Week are sold out as far as I know. I am placing an order through Kablam for a large stock this upcoming week as soon as my tax return comes in.

So expect an early March widespread release of GSD #1. I will have issue #2 out by sometime in April. I will also have something special for Chicagoland comic stores for Free Comic Book Day in May. I will have more info on that as it unfolds.

So Wintercon will kind of be the early kickoff for convention season. I will be registering my table in the Artist Alley for Motor City Con (May 14th-16th in Novi, MI) in the upcoming week or so. I'll be joined by my Alex Ghost partner Aaron Pittman. Like I said previously, I will have a new set of prints, copies of Issues #0, #1 and #2 and I'm also working on a summer convention exclusive sketchbook. I also promise to continue my tradition of cardstock, wearable mustaches for you, your friends and random celebrities to wear throughout the shows. I also hope that by the end of the summer/convention season, I will have the Food Book near completion and ready for publishing.

I guess that's it for now. I will have pictures of the prints up as well as pictures from Wintercon early next week. I don't have an absolute ton of new art to show you but I'd like to share a poster I made for my roommate and myself's birthday party we had a few weeks ago. I think it's pretty rad. 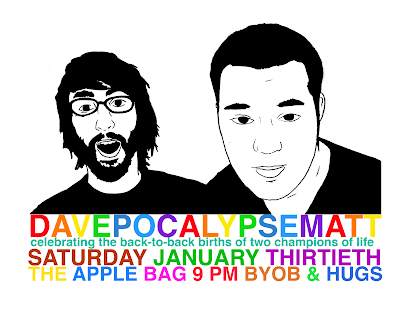