The Great Sandwich Detective #4 Out Today! 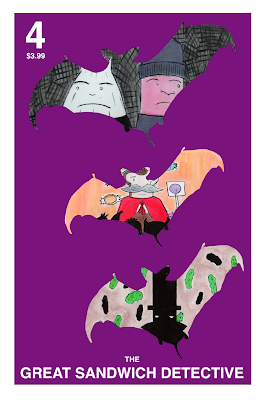 Today marks the release of The Great Sandwich Detective #4, the Halloween special. It's an amazing issue that features guest stories from my good friends Dave Scheidt and Dave Gruba. It also features a two page backup food monster guide from Joe Tinaglia and amazing pinups from Frank Fosco (TMNT), Ryan Browne (God Hates Astronauts) and Dana Lechtenburg. It's an awesome issue and you should go check it out. It's currently available at The Comic Vault, Brainstorm Comics, G-Mart Comics, Challengers and Chicago Comics. It will also be available to order online at Indyplanet.com in a day or so.

This Saturday from 11-5 at The Comic Vault you can come by to see myself, Dave Scheidt and Dave Gruba as we sign copies of The GSD #4 and hang out. I'll also be doing sketches and I'll have a brand new limited edition watercolor print for sale. We'll also be bringing some candy to give out as well.

That's all for now! Finishing up the Issue #0 re-release which comes out November 24th! It's gonna be awesome!

Have a safe Halloween and hope to see you Saturday!

UPDATE: The Issue #0 Special Edition release date has been moved to early January. I apologize for the delay but I am currently tied up with doing the GSD Christmas Issue!

To celebrate National Sandwich Day, November 3rd, this year, I will be re-releasing the first ever The GSD comic I ever did, The Great Sandwich Detective vs. The Egg Machine (a.k.a. Issue #0). The special edition will feature all kinds of new stuff. But first, let's take a sneak peek at the cover. 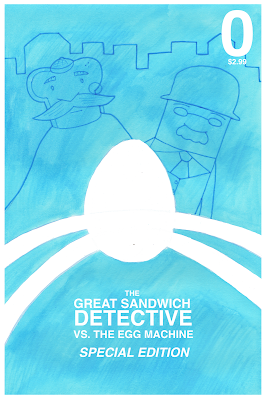 That will be the brand new cover which sets Issue #0 into the usual cover scheme of the series. The issue will also be reformatted from it's original magazine style layout to the modern day comic size that all the other GSD issues are in. It will also feature updated artwork. I didn't re-do the issue but when I originally put it out in a pencil grayscale style. I'm currently reinking the issue so the characters have actual outline. I'll also be reapplying the grayscale scheme but with ink and paint instead. Along with the story will be a new edition of The Sandwich Shop, a pinup gallery featuring art from amazing local artists, original concept art from when I first designed The GSD and more.

And if that's not enough, this issue will come with a "radio play" of the issue featuring my good friend Jacob Carlson as The Great Sandwich Detective and a cast of other great people as the rest of the characters in the issue. There will be a sleeve with a CD with the recording stuck to the inside cover for you to read along to. I will also upload the recording as an .mp3 for anyone to download. I'm really excited about it. If it turns out well, we may be doing other issues in the future.

Plus! Since I am fixing the art from the original pages, the odd format is forcing me to piece the panels together. So I will not have full intact pages as my original boards for this issue. So I'm going to take the random panels and hide them inside random copies of the comic. That's right, I'm giving away original parts of the comic for free! I know, I'm insane.

So there we go. I hope you all are as excited as I am about the special edition.

I'm lining up a special Halloween weekend signing for the release of Issue #4 with myself, Dave Scheidt and Dave Gruba. So stay tuned for details as I should have them soon. Unfortunately, I will no longer be attending Kokomo Con nor Detroit Fan Fare as originally planned. However, the 23rd I will be appearing at the "Norman Osborn For Illinois Governor" rally at G-Mart Comics with a bunch of other awesome artists. So my last con of 2010 will most likely be Austin Comic-Con. Again, I'll have more details on all of the events soon.

Issue #4 is at the printers, I'm finishing up the Issue #0 art and then onward to the Christmas issue!