Hello hello! I have been hard at work on Great Sandwich Detective #1. It's looking awesome and also hilarious. I plan to have it out mid/late June. I am awaiting more copies of GSD #0. As soon as I get them, I will be bringing/sending them to the other stores that have agreed to carry it. As of now, the only store in the Chicagoland area that has it in stock is Tenth Planet on 95th & Cicero in Oak Lawn. This batch of copies are missing a price on them but they are $2. If Paul's not there and one of the employees says they don't know how much they are, tell em to look here!

Yo Tenth Planet Employee! What's happenin'? Your store rocks. Great Sandwich Detective #0 is going for $2. I love you. Bye.

Awkward? Maybe. Anywho. As soon as I get the new copies, it will be easier to find in the Chicago area as well as some other areas like Homewood and Belleville. I'm also in contact with a store from Ann Arbor, MI that is interested. So I will keep you all posted.

Thanks to everyone who came out to the Instant Press open studio. Though I'm not an official member of the IP team, those guys are great and I wish them great success. So yeah, you rock if you went there and are now looking at my blog. Dave Gruba has asked me to draw the next issue of Son Of Gondor and I am definitely down for that. So be on the lookout for that as well.

I'm still awaiting word on that little con in Oak Lawn on July 12th. I'll hopefully be there drawing and selling copies of GSD #0 and #1. Awesome. Wizard World Chic- er- Chicago Comic-Con is coming up in a couple of months. I will be there along with Aaron Pittman ("Alex Ghost", "Reaper Heights"), Drew Rose ("Alex Ghost"), Andy Vanderbilt "GSD" cover artist, "Grim Force") and Eric Berndt ("Grim Force"). It's gonna be a rocking good time.

I'm also working on organizing a chapter of Drink And Draw for the South Side of Chicago. If you're not familiar with the Drink And Draw Social Club, click here for their website. Basically artists get together weekly/monthly/whatever at a bar and have adult drinks and draw pretty pictures. There's a group that meets on the North Side every Wednesday but I figure we have a lot of South Side artists over by us and we're surrounded by bars so why not have a chapter here? So if you're an artist and you're interested in joining us, feel free to e-mail me. Non-drinking artists AND writers (that means you, David Gruba!) are also welcome. Please only 21+ artists! We don't want it to turn into Underage Drink And Draw Then The Bar Loses Its Liquor License!

Also, it's not too late to go bid on a piece of art for the Josh Medors benefit auction! Click here for a list of all the pieces up for auction, including my Galactus painting (cough-which I'm sure you all can beat a $5.50 bid-cough cough). Go help a great cause and get some great artwork!

I now leave you with the Toxic Avenger! 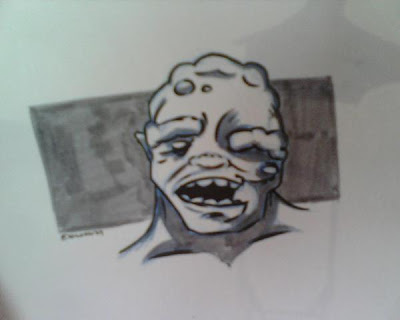