Okay, okay, okay. So I'm late. SO SUE ME. I'm sorry for getting loud just now baby. I didn't mean it. Alright and the award for the weirdest blog intro of 2008 goes to...

So I've been a bit lax of late with the whole tooth debacle and work. I've actually drawn a lot today as well as last night and a bit sprinkled throughout the past week. Since I'm waiting for Aaron to send me the first set of pages for Alex Ghost #1, I've been working on my own graphic novel, Doodle & Boogs. It's a kid-friendly graphic novel about all the weird stuff that happens when you're a young one. Right now I'm working on character designs and outlining the story. I plan on posting some of that up sooner or later as well. But today I knocked out three solid pin-ups that I had to put up cause I really like them. So these should make up for my lack of hustle as they are three sweet ones. 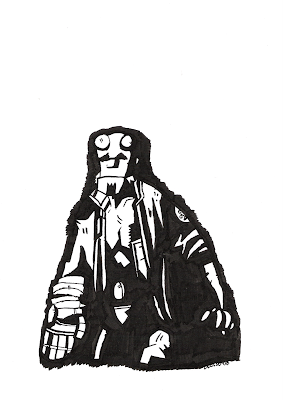 Here you got your standard Hellboy. Kinda wish I did something different with the eyes but otherwise I enjoy it. I'm giving this to Stacey. 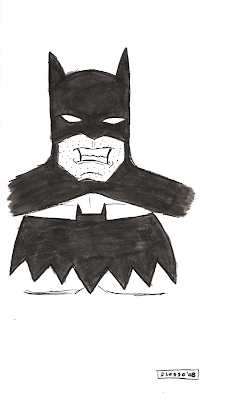 Next up we have a very angry looking Batman. I did the sketch in straight up Micron chisel tip and then filled in all the black with some Higgens design ink on a cutip. I kinda dig it as it reminds me of Dustin Nguyen's colors on his covers for Detective Comics. I've been wanting to experiment with using other colors as well and hopefully I'll get around to that soon. 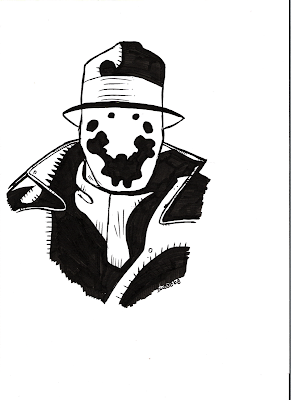 And lastly, we have our man Rorschach. Honestly, I've doodled and sketched and whatevered Rorschach about a thousand times and this is probably the best I've ever done him. After seeing the bad ass Watchmen trailer for the hundredth time, I felt compelled to draw him again. God does that movie look awesome. And that Comic-Con panel was cool too. And I know I'm a soon-to-be-married man but Carla Gugino during that panel...ouch.

As for The Dark Knight. Three words: OH MY GOD. Jesus was that movie incredible. I've seen it three times already (loser!) and I can honestly sit and watch it again with an ear to ear grin. Such a solid film.

The fall is not too far away, which means more conventions! Aaron and myself will be in the Artist Alley at the Inter-Fan Jam 2008 in Homewood, IL. It takes place September 13th & 14th at the Homewood Hotel. (www.inter-fan.org for more info). And then the whole Alex Ghost family will be packing up the station wagon in October to be a part of Mid-Ohio Con. That will be October 4th & 5th. So make sure to come up and say hello to us as we will be sitting around drawing dicks and machine guns all weekend.

Okay, so I promise I will never be this late again with blog updates. PROMISE!