Hello Hello. I finally made a little blog so I can post random doodles and stuff that I'm working on up. I'm currently awaiting pencils for Alex Ghost #1 from Aaron so I can ink the fuck out of them. We did a preview poster together to give out at Wizard World this past weekend, which I will put up in this post. I'm also working on the story and art for Issue #0 (mini preview issue) of The Great Sandwich Detective. And I'm also working with Drew (the writer of Alex Ghost) on a short 10 page story that he came up with. I'll be doing all the art for that one. I'll wait 'til he gives the full OK before I start talking about what it's about. I believe it's gonna be part of C3's next anthology, but I could be wrong.

WW Chicago '08 was a blast. Met a ton of great people, artists, etc. I got some amazing sketches from Chuck BB (Black Metal, Pulp Comics), Nick Staklar (Criminal Macabre: My Demon Baby), Geof Darrow (Hard Boiled, Shaolin Cowboy, legend), Jeff Castaneda, Phil Hester (Irredeemable Ant-Man), Erik Larsen (legend) and John Eberle (C3 crew). Unfortunately I wasn't able to snag a sketch from Art Baltazar. He was swamped all weekend now that he's part of D.C. Oh wells. I'm happy for his success, always good to see a local guy get his dues. I'll probably post those on my MySpace or something. Most of the weekend I just nerded out and hung out with all the C3 guys. Did a lot of boozing at the Red Bar in our hotel, which was the same hotel most of everyone was staying at so we bumped into Bendis about 30 times and we kept running into Jacen Burrows, who wouldn't believe that there were about five cons at the con that looked exactly like him. Saturday night we hit up the Avatar Party in honor of Warren Ellis....who wasn't even there. Since I wasn't signed up for Artist Alley, I did most of my sketching roaming around the floor when I was chilling. Anytime someone went to look at what I was doing, I would just give them the sketch and tell them to check out the Alex Ghost MySpace (www.myspace.com/alexghostcomic). Had a lot of those. I did do an hour at the Artist Alley on Sunday but that just made me thirsty for more. I did a really funny sketch of Burt Reynolds as The Punisher for Mike Byrd, who in turn got the attention of a Burt Reynolds fan who immediately came to the table demanding a sketch. So I did Burt Reynolds as Iron Man. I'm hoping she and everyone who I gave sketches to will scan me copies so I can post them. I also got a buncha mini sketches I did on my hotel notepad during the Warren Ellis panel, which became my unofficial and infamous "con sketchbook". I'll scan those when I'm not lazy. In the end, I spent a shitload of money and my feet still hurt but I'm still looking forward to next year already (WHY THE FUCK DO WE HAVE TO WAIT TIL AUGUST NOW?!).

We're going to be doing as many cons as we can, especially since Alex #1 will be coming out soon (we hope) and quite simply because they're a ton of fuckin' fun and we love the idea of getting paid to draw stupid shit we would doodle in our sketchbooks anyways. I know for sure Aaron & I (and I'm hoping Drew as well, but we haven't asked him yet) will be doing Inter-Fan Jam 2008 in Homewood, IL in September. It's really cheap to get in, so you should check it out, if only to come have us draw dicks with Batman masks or some insane crap. And then we're either going to be doing Minnesota Fall-Con or Mid-Ohio Con. They're the same weekend so we gotta choose one. After finding out that Minnesota gives free Artist Alley tables, free food to said artists and a BBQ at the end of the con, I think I'm leaning towards good ol' Minnesota. But we'll keep you posted on the Alex space.

For being an art blog, I typed entirely way too much. So here's the inks and then the finished color version of the Alex Ghost preview poster. And go to the MySpace (www.myspace.com/alexghostcomic). 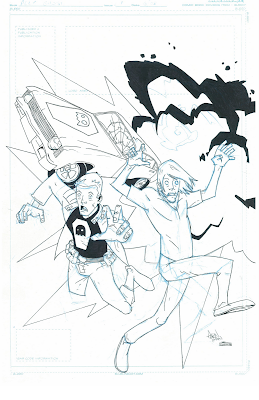 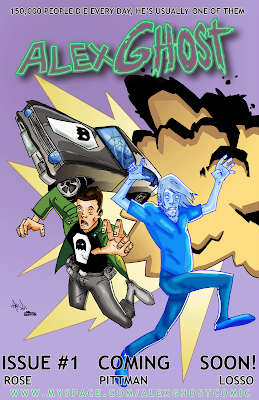