Finally, finally. I have some new art to post up. One is new and one is old. So I quit my job last Thursday, without a back-up job. I think I'm gonna win the award for Smartest Thing Ever Done. So I'm living off my last two paychecks plus some money I made selling The Dark Knight viral stuff online. (If you wanna, you know, buy some art from me, I do accept PayPal, money orders, checks and PEZ). I have a few prospects in line and hopefully I'll be getting some calls soon. But for now, I'm enjoying my unemployment. I've worked on average 5 days a week for the past 4 years with probably a total of 3 weeks vacation. So I do have a lot of free time to work on stuff. I would have more art done but I've fallen ass-backwards into being the writer on Percy The Nazi Killer. And I'll have to admit, as much as I love drawing, writing's a fucking blast. I just love it, especially since the source material that Aaron created way back when has opened up so many creative opportunities. I have so much planned for it. I just finished typing Issue #1 today (I did an Issue #0 as well, which we will be doing as a preview for Mid-Ohio Con I believe). So now that I have two issues already knocked out, I think I'll take some time to get some drawing down, maybe work on Doodle & Boogs some more. I'm also waiting (impatiently) for Aaron to send me Alex Ghost pages to ink.

So onward with the art. I drew a really funny picture of the Hulk running a marathon yesterday as a gift for Erin Norton, my friend's older sister who will be running in a marathon this October to raise money to help fight AIDs. So Hulk is yelling "Hulk Smash AIDS!" as he crosses the finish line. And like an asshole, I forgot to scan it before I brought it to the benefit last night. So I'm hoping Erin will scan it sometime or take a snapshot and send it to me so I can post it here. I'd really like to host a drawing night session sometime soon to help raise money for the marathon. Just get a buncha people together sketchin, invite people over, crack open a nice box of wine and then sell the sketches for charity at the end of the night. You know, Dave, you might be on to something.

So onward with the art, again. Finally. 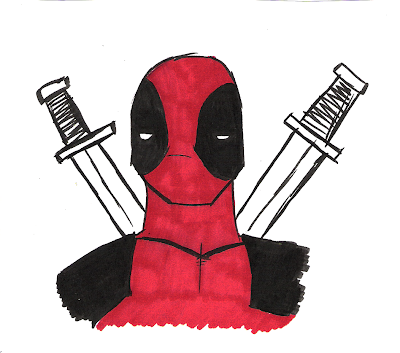 Here's a Deadpool I did as a warmup sketch yesterday. Just a quick Micron chisel-tip and then some red Sharpie. I know the swords are uneven, but oh well. I don't draw enough Deadpool, so there. Plus I got pumped to do some Deadpool after I checked out Skottie Young's Blogspot. He did the covers for Cable vs Deadpool and he's the current New X-Men artist and will be doing the eight-issue Marvel Illustrated Wonderful Wizard Of Oz mini-series. He's also a fellow Chicagoan. Go check his shit out, I'm gonna put it in my links list. 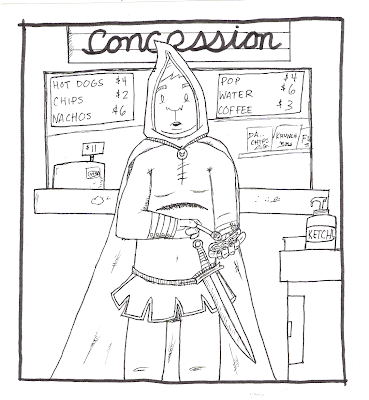 I actually witnessed this happen at Wizard World Chicago 2007. I immediately had to sit down and draw it in the midst of trying not to shit my pants cause I was laughing so hard. That's what cons are all about, seeing people break character. Like when we saw Obi-Wan Kenobi at the lunch buffet this year at the hotel. Good shit.

Until then, that's all she wrote. I hope to have more art up this week. Peace bromosexuals.