Hey guys, just dropping by with some stuff.

I did a couple Marvel blank variants for the Comic Vault this week and they are now for sale at their Ravenswood location. One is for FF #1 and one is for Fear Itself #1. I plan on doing more of these in the future. I'm not sure what price they're selling them at. Each one is one-of-a-kind, hand-drawn by yours truly. And each one comes with a hand-drawn concept sketch of the cover on a piece of legal pad paper, tucked into the inside cover. And here they are: 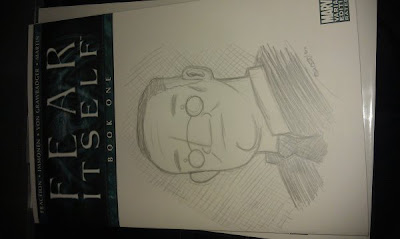 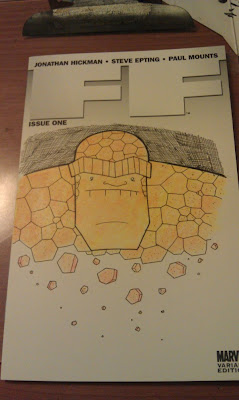 I'm finishing up the GSD #6 this week for an end of April release. It will start a three-part series that will wrap up the week of San Diego Comic-Con in July.

A super-awesome project I've been working on with Aaron Pittman will be announced within the next couple of weeks. We're really excited about it and to finally talk about it! Stay tuned for details!

Just a reminder, the Dave Will Only Make A Penny Sale is going on over at IndyPlanet until next Wednesday. Awesome deals on Great Sandwich Detective back issues. And all variant cover purchases benefit the Red Cross. So go pick up some books and tell your friends!