So convention season is almost upon us and I'm really excited. I'll be kicking off May with my Free Comic Book Day World Tour! So far I will be signing at Brainstorm Comics and The Comic Vault. I'm hoping to add one or two more stores to that list so it's a full day of it. I will be debuting the first little issue of my other non-GSD-related project. This is a book geared more towards little kids, whereas GSD is kind of a book for everyone. Not to say older folks won't find the humor in my new project but I'm making it easier for beginning readers to be able to read. I'll also have some stuff for sale that day including a brand new print. Two weeks after that I'll be at Motor City Con (Novi, MI) and the following week at the brand new Summit City Con (Fort Wayne, IN). They have some cool stuff planned for Summit City Con including a charity auction of pieces donated by all the artists. You should check it out.

Slowly but surely working on Issue # 2. I still aim to have it out in May. I'm behind on ordering more copies of Issue #1 and I apologize to the stores and readers who have been waiting for it. I plan to finally put the order in within the next couple weeks. If not, you can smack me. I'll definitely have copies in time for the cons but I'd like to be able to restock the local shops first. I also plan on re-releasing Issue #0 with a variant cover. 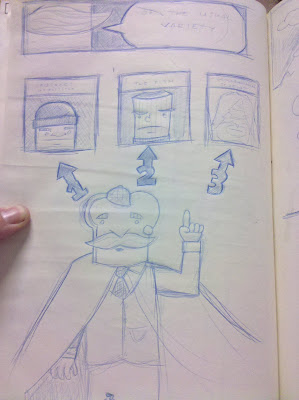 Well I should get back to work now. I'm excited to see you all this summer. Hope you're having a good week. Go Sox!