All Hail The Dark Lord!

So the Christmas of beer geekery happened yesterday: Dark Lord Day at Three Floyds Brewpub in Munster, IN. Such an awesome time. I drank a lot, got some good food, had a great day with friends, saw Brian Azzarello's scary ass and most importantly, got my bottle of Dark Lord 2010 which will join my '09 bottles hiding in my closet.

So naturally to kill the time between drinking beers, I got some doodling done. It got to the point where I was trading sketches for tastings. Met some awesome people that way. Good times all around! 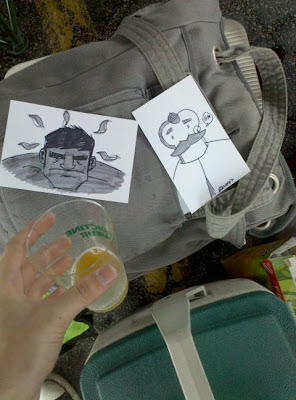 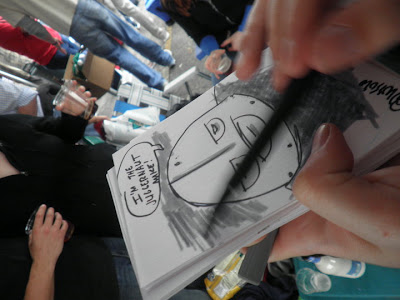 Speaking of great days in geekery, this Saturday is Free Comic Book Day! I have a crazy hectic schedule that day. I will be appearing at Brainstorm Comics, G-Mart Comics and The Comic Vault and I'm awaiting word about appearing at The Zone Comics in Homewood, IL as well. I should have that confirmed shortly with times and all. I would be appearing with two great creators, Nino Mesarina (who I will also be signing with at The Comic Vault later that day) and Frank Fosco (TMNT, Savage Dragon, etc.). So yeah, I should have an updated schedule shortly. I will be releasing a limited quantity of the first issue of my early readers book "How Stuff Happens". So make sure you bring the kids out to get their copies. I'll be signing and doing as many sketches as I can. It's gonna be an exhausting but awesome day. Hope to see you all there! Here's a poster for The Comic Vault's planned festivities: 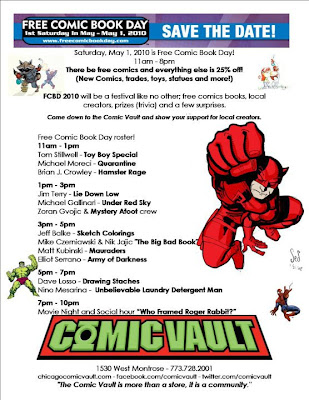 I'll be updating again this week with a confirmed signing schedule, a preview of "How Stuff Happens", a picture of the print I'll be selling this weekend as well as what stores you can catch my good friends and fellow creators such as David Gruba and Rene Castellano!