Okay, so there was a bit of a delay in my Comic-Con recap. I've been really busy with work and preparing GSD #1 (I got a lot of awesome things planned for the release). But finally here it is, my official CCC '09 recap. (This is gonna be a pretty long post because I have some other cool stuff to talk about after the recap).

Of all the years I've gone to Wizard World Chicago (now dubbed Chicago Comic-Con), I've never been part of the show. I've gone and bought tons and tons of crap and hung out in the Artist Alley, either talking to artists I knew locally or drooling over original artwork some other pros. But I never had a table until this year. Best way to put it was I was extremely excited and very unprepared. The con always seems to sneak up on me and pair that with my recent move, I totally didn't have time to do everything I wanted to do for the show. But I had a wonderful time nonetheless. This year the big three didn't show up so fortunately for us artists, that meant the alley was flooded with con-goers all weekend. It was really awesome to see the convention being about the artists again. We met a lot of great people over the weekend. I'd like to thank everyone who came by and gave us hugs and high fives and bought our stuff. If you happen to come across my blog and you bought a sketch or painting from me, I'd really really appreciate it if you could send me a scan of it as I didn't get a chance to snap a picture of everything I did that weekend. I'd love to put it up here! I do have some pictures to share though. So check em out below. This weekend was a blur of drawing, people in costumes, us dancing to mariachi music, convention pretzels, underpants and insanity. To sum it up, greatness. I'd also like to thank all the artists and creators we met this weekend who gave kind words and hung out. The comic community is really awesome, especially the one here in Chicago. I guess I thought I had more to write but I guess not, haha. So check the pics out and then I'll have some more to say after that. 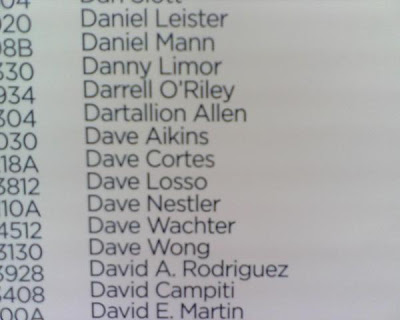 One of the happiest moments of my life. 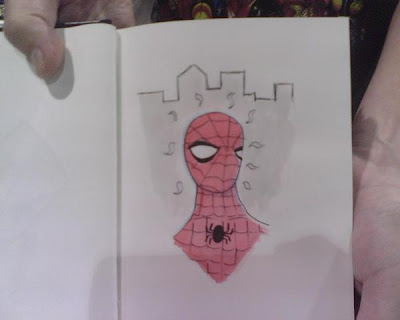 I don't think I'll ever get sick of painting Spidey. 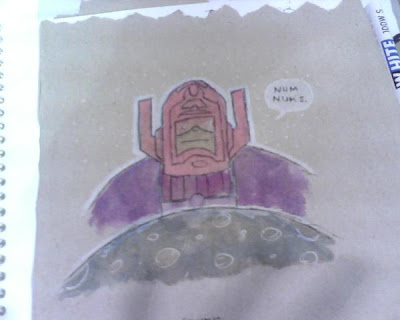 Galactus neither. This was the point in the convention when I ran out of sketchbook paper and started painting on paper towel from the bathroom. I think it looks nice. 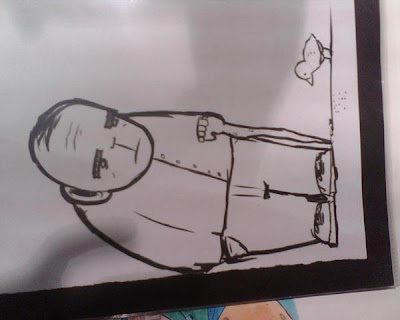 This was an old practice sketch from my portfolio. I do a lot of exercises where I'll make a vague shape and then attempt to turn it into something. I really really liked this piece. 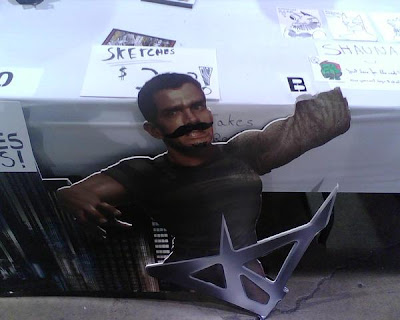 We found Sandman in the garbage can by our table and decided to class him up and make him our mascot! He's in my closet at my apartment as I type this. Expect to see him more often folks.

That was exciting wasn't it? Shake your head yes. There you go.

As I said before, I am still finishing up The Great Sandwich Detective #1. It's almost finished and I'm setting it up for a mid-September release. It's turning out really awesome. I'm sorry it's taking so long but there's a lot that goes into it and like I've said a million times before, I don't always have the time with work and everything. But I do have some awesome promo stuff in the works for the release of the issue that's gonna be a lot of fine. I also plan to release this on a fuller scale as opposed to the staggered releasing I've unfortunately had to do with Issue #0. I've gotten some copies into some stores in the city. You can pick a copy up at Challengers as well as Brainstorm (which is sadly closing in October, so please go there and buy a million things!). I still have to stop by Chicago Comics and Quimby's. And I also still need to mail some copies out to the suburban stores as well as the out-of-state stores. If you know of a store that would carry GSD, please please let me know. I don't care what state it's in, I'll send some to them. But for Issue #1, all the stores that carry GSD will all get copies at the same time. I promise. Keep checking back for an official release date.

The Size Matters show at The Nerve Gallery in Oak Park has recently wrapped up. I was very honored to have my work hanging there. I still have the paintings so if you are interested in purchasing one (or all) of them, feel free to shoot me an e-mail. They are $40 each (plus shipping if you're out of state or far from me). I'll probably throw some free copies of GSD in there for you as well. So hit me up. The next show at The Nerve Gallery is tentatively September 5th. They'll have more info up soon I believe. This show is a tiki theme complete with a tiki bar and bands playing. I will be debuting three new pieces at the show. I will post the info when I get it. I'd love to see you all out there!

A big plus of Comic-Con weekend was I got to see my good friend and Alex Ghost partner Aaron Pittman. Aaron's work has gotten so much tighter and even more astounding. He has some awesome projects and prospects coming up so you should keep an eye on him. We're also going to be getting back to work on Alex Ghost soon. The new pages are amazing. And we're also working on a super secret pitch for a new book for one of the big three. We'll talk about it more another time but it's really really cool and we're hoping it can work out.

I guess that's it for now, thanks for checking back with me.

P.S. There will be some sneak peek shots of Great Sandwich Detective #1 up this week. Please hold back your excitement.
P.P.S. I've added a direct feed of The GSD's Twitter page. Now you can see up to the minute updates of events as well as what stores have GSD in stock!