I hope you all had an awesome holiday season and are settling into the new year comfortably. As for me, it's the usual business. Trying to get a million things done in the next couple months before con season explodes! Con season starts a bit early this year with a brand new show in February, Dan Con. Definitely looking forward to that. I'm still putting together my 2011 con schedule but it's already shaping up to be an amazing year.

This Saturday is the opening of the 33 1/3 art show at Cup Of Joe in Cedar Falls, IA. 33 1/3 artists each chose an album cover to reinterpret in their own style. I chose Plague Soundscapes by The Locust. The piece is paint marker on glass on the outside and then inside the frame is a spraypainted, busted up record and spraypainted fiber board. If you're in the area on Saturday you should definitely stop by and see the amazing pieces on display. 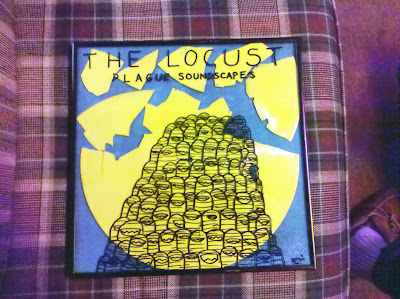 Unfortunately, I won't be able to make it out to Iowa this weekend so my signing at Limited Edition Comics will have to be rescheduled to early spring. I'm sorry to everyone who was looking forward to it and I promise I will be out there ASAP. An order of all of the issues of The Great Sandwich Detective will be shipping out there sometime next week!

Besides working on The GSD, I've put my writing hat back on and have been working on a new series called The Tenants. Joining me will be my Alex Ghost partner, Aaron Pittman. So far the pages he's been showing me are unbelievable. I'm very excited. Details are a bit under wraps for now but hopefully we'll have some good news about the series soon.

I suppose that's it for now. The GSD #0 Special Edition may be pushed back a week to February 2nd to accommodate the big Fantastic Four (er-Three) event happening on January 26th. I'll have the update on that shortly. And the series picks back up in Issue #6 which will be out March 16th, just in time for C2E2.