Sorry it's been a while. Things have been hectic. Issue #1 was completed and had an early printing for Indy Comic Book Week this past week. I was a guest at Brainstorm Comics where I signed copies and hung out all day talking all things geek with the staff and customers alike. Issue #1 hasn't officially come out though. I brought a very limited number with me just for that day. I am placing an order for a full stock this Friday for a tentative official release in a couple of weeks. Once I have a confirmation of my printing, I will make an official release date. So on that day, Issue #1 will be released at all stores that carry it. Currently, there are a few early copies left on the shelf only at Brainstorm Comics. So if you wanna get it ahead of the full-scale release, I suggest you hurry over there before they are gone. I'd just like to give a big thanks to Robert, Sean and Matt at Brainstorm for having me as a guest and a big thanks to those that came out and bought a copy and hung out. Ya'll made a big kid's dream come true for one day.

Issue #0 is currently out of stock at most places that carry it. I also currently have no copies printed. I will be placing an order at the end of the month for more copies so I can re-stock the stores (plus some other stores) in early February. However, after that, it may be the last printing of Issue #0 for a while.

At the moment, I'm figuring out my schedule of release for GSD. With the amount of work I put into each issue plus working a full-time job it's hard to make a deadline for myself. I may be implementing a bi-monthly release schedule. It sucks but it may be the only way to ensure that I have a set release schedule instead of a sporadic one. I'd rather have an even month between issues than have two come out back to back then release one three months later. Nothing is set in stone right now.

I'm currently working on Issue #2 right now. I have the story outlined (the conclusion of the "No Crying Over Spilled Milk" storyline) and I started thumbnailing with hopes to start pencilling pages by next week. I may have this issue out by the end of February before I implement the bi-monthly release schedule.

With winter fully in effect, that means only one thing: convention season is only about 3 1/2 months away. I'm starting to make plans now. I'll for sure be back in Novi, MI this May for Motor City Con 2010. That month I may also be heading down to Texas with my good buddy Nino Mesarina for TableCon Texas. It's a toss-up between that and Staple Expo in Austin, TX. I'll be ironing those plans out within the next month. I'm currently on the waiting list for C2E2, so we'll see how that goes. Definite yes on Chicago Comic-Con 2010. There's one other bigger show I'm looking at as well. Plus the array of local shows and cons which I love just as much. So expect my schedule box to be filling up within the next couple months.

Wow, I've typed quite a bit. I hope everyone's holidays were great. I'm gonna get back to work on the funny books! 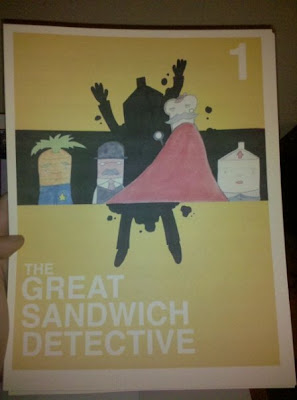 P.P.S. The Sammich Tweets posting is currently down as Blogger is having some issues with their Twitter widget. Hopefully it will be fixed soon. To stay up to date, follow TheGSD on Twitter.com. Sorry for the inconvenience!
Posted by Dave at 12:27 AM